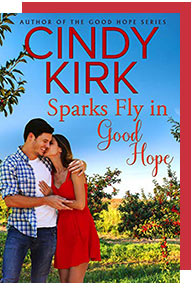 Greer Chapin doesn’t do crazy things in the name of love. Yet when no one steps up to run for mayor of Good Hope, love for her hometown takes over. That smart, sensible Greer would make an excellent mayor is a given—as is the fact that she’ll win, because she’s running unopposed. Or so she thought. When another candidate throws his hat in the ring at the eleventh hour, Greer’s world is turned upside down.

Wyatt McConnell can’t believe how much his life has changed. Two months ago he was working long hours as a city manager in Chicago. Then he learned that a grandfather he never knew had died and named him as his sole heir. Faster than you can say ‘neighbors helping neighbors’ Wyatt moves to Good Hope and finds the home he’s always dreamed of. He might even have found the woman of his dreams too—if he can convince Greer not to hate him for running against her.

Falling for their opponent might be irrational, but Greer and Wyatt can’t resist each other. As election night nears, the reality of their situation is impossible to ignore: While there can only be one winner, both candidates are in danger of losing their hearts.