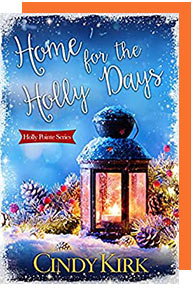 HOME FOR THE HOLLY DAYS
From Waverly Press
Book 1 in the “Holly Pointe”series
November 2021
ASIN: B094LFV7J8

A model who lost the limelight. A hockey star benched from the game. Will a small-town Christmas celebration reveal a most unexpected gift?

Going “Holly” Wood isn’t what America’s sweetheart, Krista Ankrom, had in mind when she made her annual Christmas trip to Holly Pointe, Vermont. Frustrated after losing another job to a younger rival, and fearing she’s walked her last runway, she’s hoping the happy site of her childhood Christmas pasts will be the perfect hideaway. But when asked to team up with NHL superstar Dustin Bellamy to save the town’s weeklong holiday celebration, how could she say no?

Dustin Bellamy is devastated that his days on the ice could be over. Needing distraction after suffering a career-ending injury, he agrees to be the celebrity host for his hometown’s Christmas celebration. But when his beautiful co-star—and former high school sweetheart, Krista Ankrom--shines a light into his bleak world, he worries his jingling emotions will distract him from his next professional move.

Beneath a sky of softly falling show and twinkling lights aglow, will Krista and Dustin share a yuletide fling? Or will the magic of the season bring them the real thing?