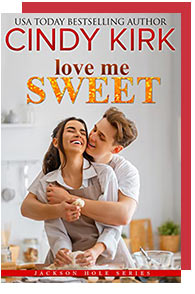 Cinderella and Prince Charming don't only live happily ever after in fairy tales...

Sylvie Thorne doesn't consider herself a runaway fiancée. Okay, she did leave her fiancé, Dr. Andrew O'Shea, behind but logic told her it was for the best. She should have never accepted his ring. She was a struggling baker trying to rise above her humble beginnings and he was a Boston blueblood. It was obvious, at least to his family and friends, that they were an imperfect match.

When Sylvie bolted, she didn't leave a glass slipper for Andrew to find, only a simple text. She never expected him to follow her to Jackson Hole wanting closure.

Twenty-one days with Sylvie is all he asks. Three weeks for him to accept that they were never meant for happily ever after. Instead of proving how little they have in common, all the conversation and togetherness makes for a sweet reunion and has this prince-of-a-guy hoping fairy tales really can come true ...

Grab your copy of this uplifting romance now and start reading today. Be prepared to smile as you close the last page.

Originally released at The Doctor’s Runaway Fiancée, this wonderful story has been completely updated.