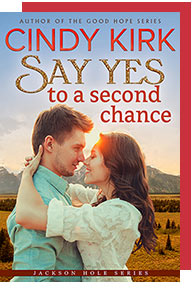 At fourteen, one shared look convinced Adrianna Lee that she and her neighbor were soul mates. She’s older and wiser now, but a smile from Tripp Randall still makes her heart flutter.

Tripp’s charmed life came to an abrupt end three years ago. When his wife died in childbirth, the loss brought him to his knees. Now his father’s illness has him back in Jackson Hole to stay.

Though his ailing father’s dream is to see Tripp happily settled, Tripp doesn’t feel he’s ready to get serious. But when his dad turns Cupid, Tripp convinces a reluctant Adrianna to play along.

Adrianna’s teenage dream is coming true. She and Tripp are spending all their free time together and having fun. The line between pretend and reality is rapidly blurring. Can true love and a future together be far behind?

~This story was originally published as A Jackson Hole Homecoming (as noted on the copyright page) It was updated (WOW-has technology & fashion changed in ten years!) as well as some of the writing was tightened. What hasn't changed is this is a heartwarming story you're going to absolutely love!~