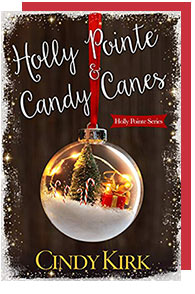 Quirky Faith Pierson loves her life in rural Vermont. Especially in December when she throws herself into the local holiday festivities.

Widower Graham Westfall doesn’t have time for Christmas. After missing the mark on his last ad campaign by a New York mile, his job now hangs in the balance. He has one month to come up with a new campaign or he’s out. He arrives in Holly Pointe planning to work the month away while his twin daughters spend time with their grandmother.

When he discovers there’s no room at Gramma Ginny’s Inn, his only choice of lodging is the one place in Holly Pointe he doesn’t want to be…the Candy Cane Christmas House.

Holiday Party Central accurately describes the home where Faith and her Grandmother live. Under this roof there are cookies to bake, lessons to learn and love to embrace. If a romance between an artist and an ad executive can’t bloom at this time of year…then when?