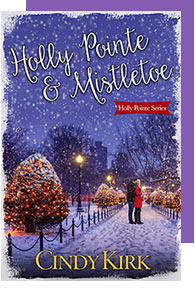 All journalist Stella Carpenter wants for Christmas is her life back.

After losing her family, her boyfriend, and her job, Stella is on the verge of being ho-ho-homeless. Out of desperation, she accepts an assignment to write a story on Holly Pointe, Vermont, the tiny town recently crowned the ‘Capital of Christmas Kindness’. If she can prove the town’s holiday spirit is a sham, her Editor promises Stella will start the New Year with a new career.

Rancher Sam Johnson is Holly Pointe’s resident Grinch--at least in the eyes of the tinsel-loving townspeople. It’s not that he doesn’t like the lights and the carols. It’s that they remind him of the brother he lost. Christmas is a time for family, and if Sam can’t have that, then he prefers to spend the holiday alone. But when Stella blows into town on a wild winter wind, the frosty walls around Sam’s heart thaw.

Charmed by Holly Pointe, Stella is torn. She doesn’t want to betray the friends she’s made, but she’s scared to give up the life she knows. And then there’s Sam. She never expected to fall in love with someone so different from her, yet that’s exactly what has happened. While Stella searches for a solution, the real reason for her arrival in Holly Pointe is discovered. Now, it’ll take a true Christmas miracle for Sam and Stella to make this holiday a happy one.