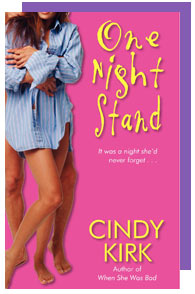 Weddings can make a girl a little crazy…

Which is probably why Marcee Robbens found herself in the arms of a sexy stranger before the bouquet was even tossed at her best friend’s wedding.  And after a night of knee-weakening kisses in handsome Sam McKelvey’s arms, even happily single Marcee is humming the wedding march.  So when the sun comes up and Sam hits the road, the usually touch-as-nails beauty finds herself nursing a tender heart…

Sam’s not the kind of guy who would have a super-hot hook-up with a woman he barely knows.  But something had him mesmerized—enough for this usually sensible single dad to abandon his responsibilities for one unforgettable night.  But Sam never thought his one night stand would turn up as his new next-door neighbor.  Or that once he glimpsed the soft side of this captivating woman, he’d find himself falling in love…